skip to main | skip to sidebar

The journey of a lifetime - Day 1

Ok, I have to admit, I haven't been keeping the blog up lately. And I'm sorry. There just hasn't been much to blog about. Trixie was out of coat and not showing. I cut back on agility with Timber - as much fun as it is, that's one really expensive sport, and I've needed to take finances into consideration lately. So, really, you haven't missed much... until yesterday!!!!

We're taking a trip. 1900 miles. 5 days. With 4 dogs in a very small Toyota Rav 4. Yes, we're crazy. My sister, Renee, flew to Seattle as a second set of hands. We're crammed in that car like a bunch of sardines. And as I pull dog after dog out of the car, people at the rest stops look at us like we are the canine clown car.

All my dogs are good travelers. They know to relax in the car, they get frequent breaks, and lots of love and attention from us and everyone they meet.

Yesterday was 500 very long miles. Almost 12 hours from start to finish. We took lots of potty breaks - more for my sister who was downing large Diet Dr. Peppers like they were going out of style. We made it from Seattle to Missoula, Mt.

Timber. Oh. My. Timber.
Timber has figured out how to get out of his seat belt. He's very stealty about it too. So, I'm driving along and the next thing I know there is a soft nose nuzzling the back of my neck and heavy breathing in my ear. Dear Dog... Get in the back seat!!! I'd stop. Re-seatbelt him and 5 minutes later he was again nuzzling my neck. I think it was the heavy breathing that got to me.

So we're off for the day. More updates tomorrow!
Posted by dogmom2six at 8:37 AM No comments:

They've come so far and accomplished so much thanks to their loving and supportive owners! Let's all give a round of applause to Trixie, Kenji, Kona and Odie. It's their birthday today.

You might remember them two years ago as they were preparing to go to their new homes. 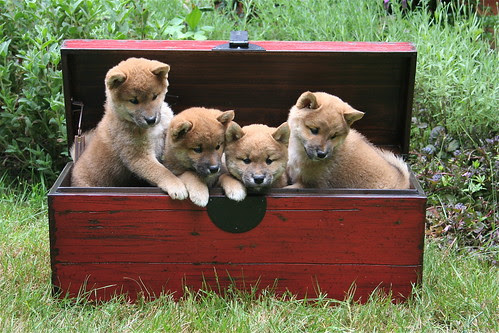 Here they are today: 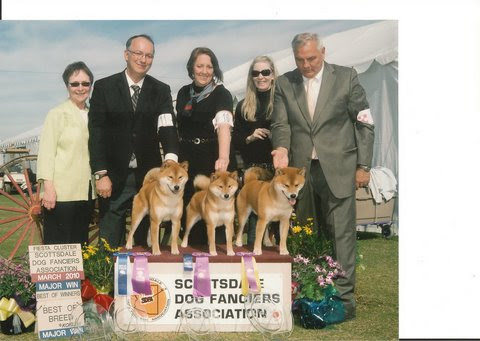 The next day Kenji and Trixie both won their second major, finishing Kenji's championship and putting Trixie 4 points from hers.

The one puppy from the litter not pictured above is Odie. Here's a recent photo of him. He's living the good life with a wonderful owner. That dog, seriously, wants for nothing. 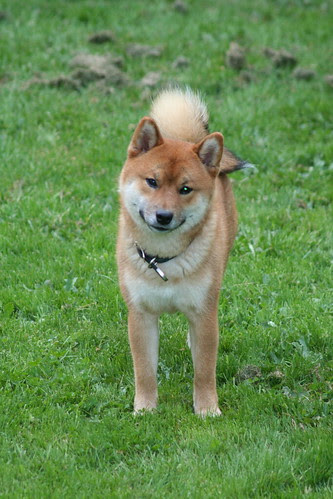 A Big Happy Birthday to Tama's puppies! May you get lots of treats and toys today.
Posted by dogmom2six at 8:02 PM No comments:

Yes, Kenji won BOB both days, Trixie won BOS for another point on Saturday. But the big news... and the dog that really deserves the spotlight because he just doesn't get enough recognition in a house full of shibas...is that Timber, my australian shepherd, qualified both days in Rally-O. On Sunday, he not only qualified, but won a 4th place ribbon with a 97 out of 100 score. I'm so proud of my boy!!! And by the way, it's his third birthday today, so he gets extra hugs and kisses and a nice big chewy. 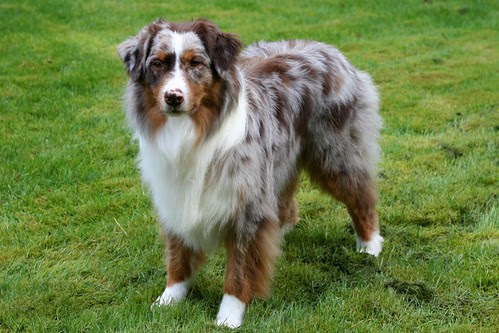 Not to overshadow Timber's success on his birthday, but here is Kenji's photo winning his championship in Arizona. Finally got the photos. 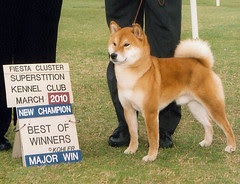 Posted by dogmom2six at 6:36 PM No comments:

Growing up and moving on...

Sometimes there is a puppy in a litter that just tears at your heart. In this litter it was Edge - the fat faced, calm demeanor, cuddler of the bunch. A friend of mine visited us a couple weeks ago and fell in love with Edge, too. And today Edge jumped a plane and took off for Arizona to an amazing home and a great future. We'll miss him terribly, but I know he has the best home any puppy could ask for. 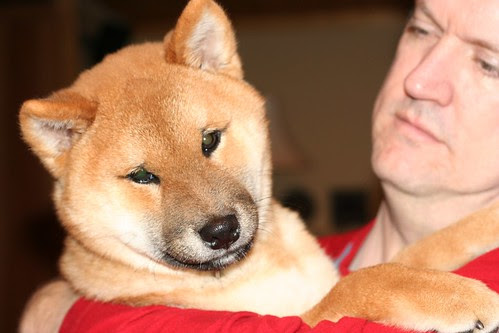 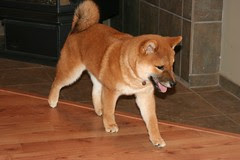 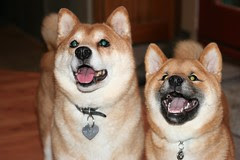 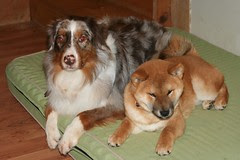 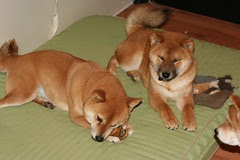 Just got home from the Fiesta Cluster in Scottsdale, Arizona.

Before I left for Arizona, I joked about sweeping the show with the three littermates that were in attendance. "Wouldn't it be nice if Kona won breed, Trixie won winner's bitch and Kenji won best of winners?" But to do that at a major show with some hefty competition, the stars would really have to align.

On Saturday, during the Arizona Shiba Inu Association's (ASIA) sponsored event, that is exactly what took place. (And we all have beautifully engraved plates to prove it! Thank you ASIA) It was a major in the girls to boot, and Kenji, by taking Best of Winner's also won a major that day.

We almost did it again on Sunday, Trixie won WB, Kenji took BW, both receiving 3 point majors and finishing Kenji's championship. An exhibitor called for the wicket in the Best of Breed class, so all the champions competing for Best of Breed and the WB and BW were measured to make sure they were within the height range. It took a really long time to wicket the 8 dogs in the ring - all while standing in the rain. Kona was pulled out against one other male dog for consideration but the win ended up going to the other, also well-deserving, special.

We were keeping our finger's crossed for more points for Trixie on Monday. She currently has 11 points with both majors. But the stars unaligned, the clouds rolled in, it rained, it poured and the show grounds flooded. The show on Monday was canceled.

Here is a photo of the show grounds on Monday morning when we went to collect all of our belongings from our little set up. 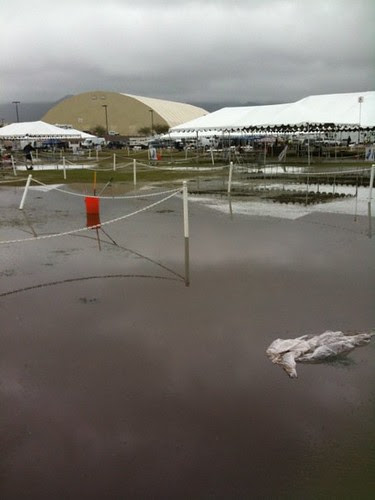 Never the less, Lennie/Tama puppies kicked some butt this weekend... Kenji finished his championship, Trixie is almost there, and Kona racked up his 6th Best of Breed Win.

Thank you John for his showing expertise, and to both John and Carol for everything you did! Thank you Valerie for letting Trixie and I invade your house for the week. I already miss you, Jeff, Kona and Pet-Kai. Hugs to all my Arizona friends. I can't begin to tell you how much I miss all of you already! You make dog shows loads of fun. Can't wait until Nationals to see all of you again. 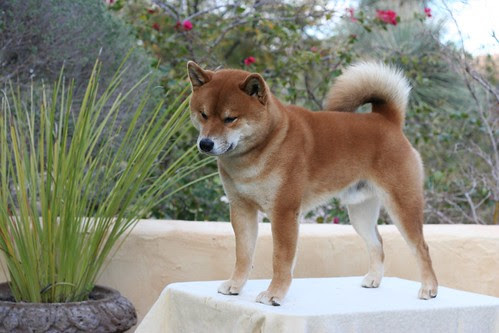 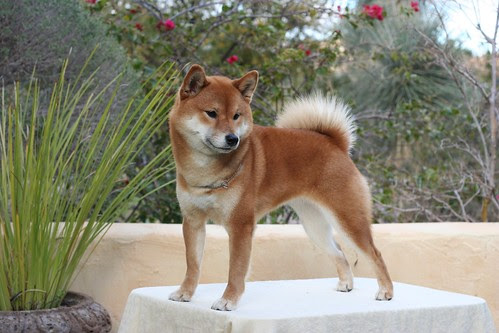 And when the dogs weren't showing, they got to enjoy time out at the pool. 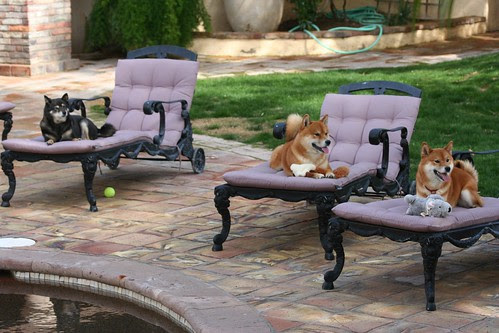 It's hard to see how fast puppies grow when you just see a photo of them all alone. I snapped this photo this morning of Edge sharing the dog bed with Tama (and Don Juan in the background). Edge is just slightly smaller than Tama at almost 18 weeks. He's still all puppy as evidenced by the teeth marks on the stair closest to Tama. Not to mention the handle on my husband's TV-watching recliner, hordes of papers from my office that look like they've been through a soggy paper shredder, My son's baby picture, lots of my son's toys and Edge happily de-fleeced my husband's favorite sheepskin slippers. No adult teeth yet, but I predict from all the chewing that they are coming soon. 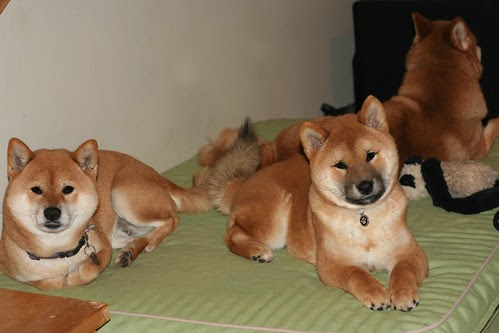 The things we are working on are:
1. Edge goes to a weekly conformation class so we get some ring experience before he begins to show.
2. He goes to a weekly puppy kindergarten.
3. He consistently will sit and down. We're past the luring stage with treats, and working on sits and downs by hand and verbal cues only.
4. He has a very consistent "watch me"
5. Putting on a leash is still an issue with the boy. He's in his "Don't touch my collar phase". But once the leash is on he loves the walks.
6. Doing nails are also not a pleasant experience for anyone involved. We practice touching the paws and pretending to clip or clipping a couple nails daily. Lots of screaming still going on!
7. Daily socialization. I take him everywhere I go.
Posted by dogmom2six at 11:36 AM 3 comments: 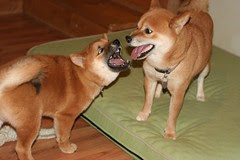 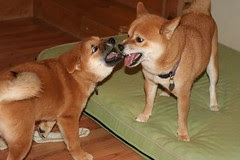 Tama: "You really think you're cute. Don't you kid." 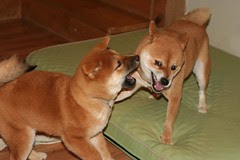 Tama: "Anyone ever tell you you have a big mouth?" 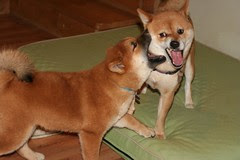 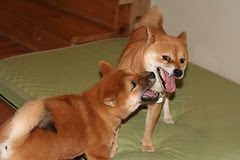 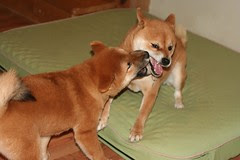 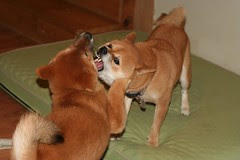 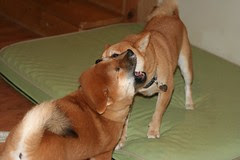 But the boy still has to get the last word in... (somehow this rings true in real life, too) 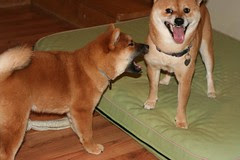